We watched the launch of falcon heavy live yesterday night. It was too historic a moment to miss!

Falcon Heavy will remain in this orbit for thousands of years with the Tesla car.

It is incredible to see what someone can achieve when there is a massive purpose in life and he or she is willing to be disciplined and ready to pay the price for it.

Tesla was created in 2003. In May 2008, “The Truth About Cars” website launched a “Tesla Death Watch”, as Tesla needed another round of finance to survive.

And here we are now watching Tesla going to Mars orbit!

As Oprah said: It is always wonderful being underestimated. 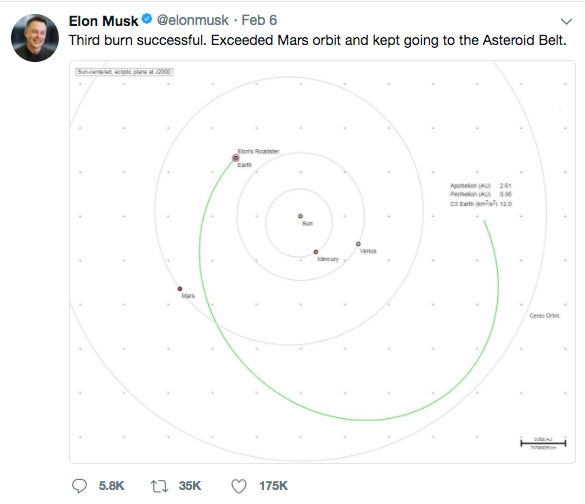 Three things I have learned from all this that leads to success.

Looks very basic and easy for everyone to do.

But as all things in life that requires progress from the normal, natural path of life ( which is atrophy, decay, and death) – requires massive discipline and going against genetically programmed instincts.

But in the end is it all worth it?

Yesterday when we were watching the launch, I was thinking, here is a guy, who is doing what even nations could not achieve.

What if watching this, a million humans are inspired and say just 100 people decide on their moonshot project and follows the steps above?

If the highest level of success is to score a win for humanity, to touch and inspire lives of millions of people and give them hope and inspiration to make do their little moonshots, Elon Musk has already achieved the highest of human achievements.