Human beings are fragile; they are affected by everything. The warmth or coldness of the cup you are holding, the ambient light, music, the tone of voice, a small change in facial expression, everything affects the narrative going on in your head and the feelings.

Imagine, a friend introducing someone to you, “hey this is my friend, she is a Stanford graduate, she is working on humanity’s biggest problems in healthcare” – Now you are expected to show admiration and nod your head and hand over your money.

That is most likely how you will react when you are introduced to the next Elizabeth Holmes looking for funds. No different from reading and believing in a news written by someone pushing his agenda using a brand name news company.

This problem exploited by software and people on a daily basis is what Elon Musk is trying to help humanity with – Remove the shield that is the brand name of the institution that is used to attach credibility to the author of the articles by introducing something similar to a believability rating proposed by Ray Dalio in a different context.

But taking this step of accepting that humans are easily manipulated requires humans to let go of the hubris about human intelligence and letting go of that self-proclaimed “most intelligent species” idea and accept the extreme limitations and fragility of the human brain and cognitive biases that get exploited.

When you use the word “evesdropped” and attribute it to an inanimate object as if it had an intention, it can trigger emotions of betrayal even though you have above average IQ, and when the author can hide his plan behind a brand which represents something else in your brain – you have been entirely manipulated, and you do not even question anything because it is too much information for the brain to process. It exploits a cognitive bias in all human minds linked to information overload.

I leave you with the daily dose of truth I found yesterday about an inanimate object where a sequence of random events leads to one isolated harmless incident. 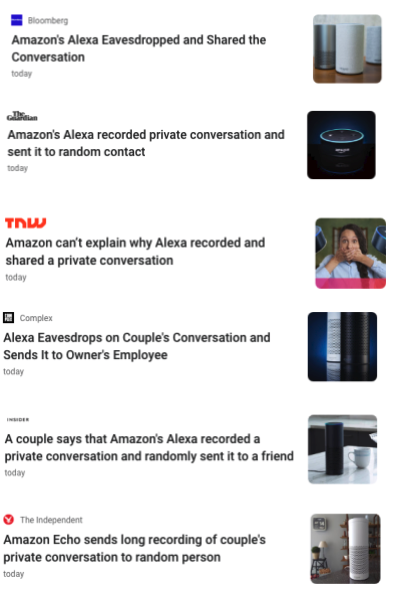